but it takes a certain amount of ingenuity to re-rat”

When we landed in Madrid none of us knew how to use our cell phones. There’s no free wifi so we couldn’t do any internet sms/mms or voip to contact our tour manager. Left to our own devices, or lack of,  I recall Howie found himself a Fanta. Patty being the traveller of the group, broke away and did her own thing. I sat on my bag on the floor and gathered dirty looks from passersby. We looked around for Dany of Microsurco Booking, but no one fit the profile… lots of soccer shirts and German tourists.

A voice at the revolving exit doors zapped us out of our daze. “Rats?”

There was our guy. Ex-law student, eccentric fringe dweller and Rock n Roll fanatic / booker Dany Torres. We didnt recognize him right away because his shoulder length hair was different from pictures we had seen. Warm gestures, hugs and handshakes later, we jumped in the van and drove past a busty bronze statue of a woman with a bull. We all howled “TOR-O” and it became a meme for the rest of the 18 day tour… 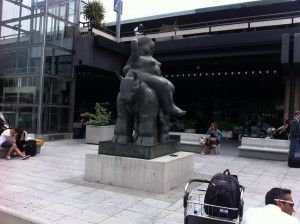 When we stopped for gas at a Repsol I swore I would get a Repsol t-shirt before the end of tour, but I never did it. Howie got a Fanta. I got a Mahou cervesa. There are only 1 or 2 kinds of beer in each region of Spain. It was kind of nice to not have to choose.

I think each of us had a “slap-yourself” moment as we drove through the gate at the old walls of Toldeo. Definitely not in Kansas anymore.. Man-oh-man there is a LOT of OLD STUFF in Spain. We did some parking and found the Explorers Club in Plaza Horno de la Magdalena. It looked kind of like a Masonic Temple or something real Indiana-Jonesy… 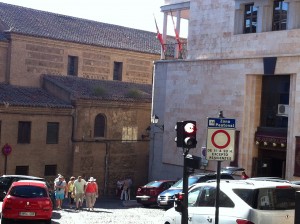 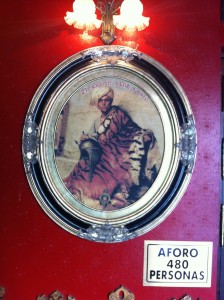 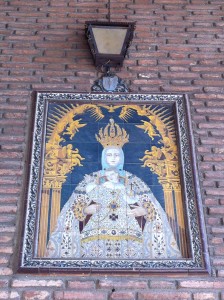 The venue was kind of a museum, probably designed after the Explorers Club in Manhattan, but with a theme that there were Explorers Clubs across the globe.

We played with a local band who had a really punchy aggro sound. The singer got a huge kick out of saying “motherfucker” in English, over and over, and the whole club would be laughing every time he said it. Some of their riffs were even a bit Ashton-esque.

People seemed to like our set better when my amp broke. A little blood-letting never hurts. Someone yelled “Take your clothes off!” for dramatic effect. People were starting to dance and holler and get real kooky. You got the sense that the night was about to blast off. 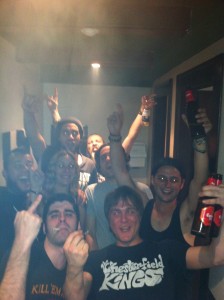 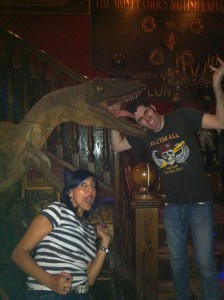 There was a smart little afterparty at a disco across town. Angel, the keys-man of Las Aspiradoras was Deejaying.

Did you know there is actually a St. Satan street in Toledo? Crazy world, huh? 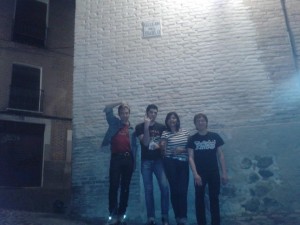 A local classical pianist who followed us from the gig to the afterparty was asking how to get into Rock n Roll. I told him maybe he should go to that street and wait for a sign. 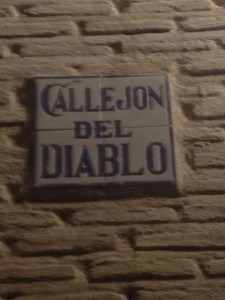 Callejon del Diablo, Toledo. The street signs are ceramic like this. No room for poles

Toledo people were kind and got us all sorts of nice things to drink, and Angel let us crash at his flat in the city. 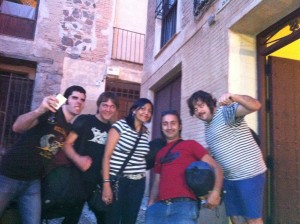 Lots of thanks to everyone for coming out and making it a bash. Best paella too. 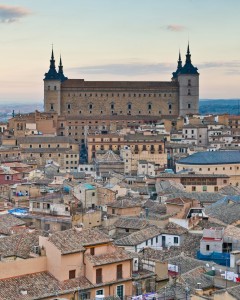 This entry was posted in The Re-Rat, Uncategorized. Bookmark the permalink.